A few days ago, Shenzhen City reviewed and approved in principle the "Shenzhen LED?a Industry Development Plan (2009-2015)" and a series of policy documents supporting the development of LED?a industry, which will be introduced in the near future.

According to the blending, Shenzhen has more than 700 companies engaged in semiconductor lighting technology and R&D, production and application, and the number of enterprises is nearly half of that in the country. The scale of the industry is about 15 billion yuan. At the same time, Shenzhen is also the world's largest manufacturer of solar LED lamps and a supply base, LED backlights, the world's major raw materials and supply base, LED Display, the largest domestic production and supply base, LED packaging and special industrial lighting domestic Mainly born in a region. However, at present, the high-end links of the LED?a industry chain in Shenzhen are still relatively weak, the technological innovation capability is relatively insufficient, and leading enterprises have not yet formed. Based on this, the relevant departments of Shenzhen City drafted the "Shenzhen LED?a Industry Development Plan (2009-2015)", "Shenzhen City to promote high-efficiency energy-saving LED lighting? A product demonstration project implementation plan", "Shenzhen â€œBuilding Plan for Public Technology Service Platform of LED?a Industryâ€, â€œSome Measures for Promoting the Development of Semiconductor Lighting? Industryâ€, â€œResearch and Implementation Suggestions on Bright LED?a Industry Cluster Parkâ€ and â€œInternational Trade in LED?â€ Brown line é” ã·éž£ ã·éž£ ã·éž£ paddle float back to a policy document. According to the "LED?a Industry Development Plan (2009-2015)", by 2010, Shenzhen will strive to become an internationally influential and first-class in the mainland. The industrialization environment is good, the degree of internationalization is high, and it has certain innovation capabilities. ?a industry features LED?a industry gathering place, a industry scale in the year? a value of more than 28 billion yuan, by 2015 to build China's LED?a industry technology innovation important demonstration base and the world's important LED?a The product development and research base a, the scale of the industry is a year worth more than 130 billion yuan. The "Planning" also clarified the five major development priorities of "?a industry, technology, service platform, agglomeration base, demonstration project", and proposed "improving the organizational system, improving the policy system, promoting institutional innovation, improving the technical system, improving the service system, and optimizing. According to the "Promotion of LED?a product demonstration project implementation plan", in 2009 Shenzhen will implement the first batch of LED lighting? a product demonstration project, the municipal government will undertake the government investment project LED application The enterprises of the demonstration project must subsidize, and the energy-saving effect of the local upper, middle and lower reaches of the a industry consortium of high-efficiency energy-saving LED lighting? a product included in the government concentration?

In addition, Shenzhen City plans to build a LED-a-industry cluster in the middle and upper reaches of LED in the Guangming New District, supplemented by downstream packaging, applications and other related supporting industries. For the development goal, LED?a industry cluster is a complete a-chain that integrates R&D-design-design-sheng-a-trade. It is also led by the government as a supporting public R&D platform, public testing platform, public information platform and knowledge-a service platform. At the same time, it has begun to select the location of the Shenzhen LED International Trade Expo Center project, determine the investment entity, and operate the model. Construction work.

Soft Led Display is ultra thin, very light weight and most flexible to design shapes, effects, in any types, arc in any angles. With repeating curving, it won't break LEDs as well design of mask covers.

The most creative product to date in the ShowLED product line, Flexible LEDs allows for more flexibility than ever before. Its ability to curve and attach to virtually any surface makes it perfect for those installations that call for a non traditional LED solution. Flxible LED is an extremely high resolution product like no other. 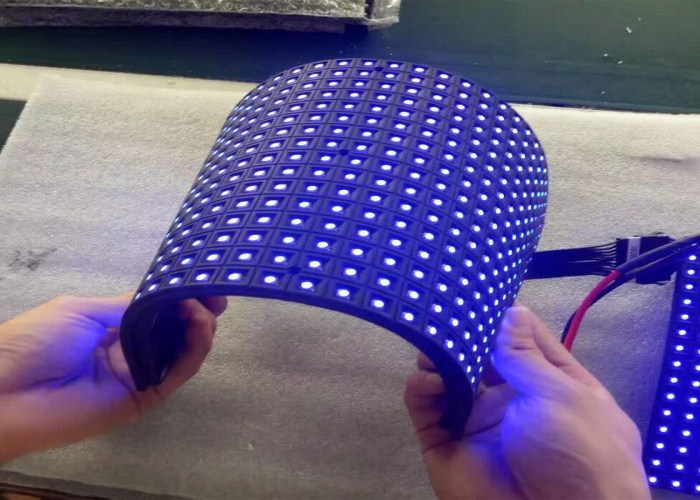 Next: Policy interpretation on supporting the acceleration of solar photovoltaic building applications...