The IP (INTERNATIONAL PROTECTION) protection level system was drafted by IEC (INTERNATIONAL ELECTROTECHNICAL COMMISSION). The luminaires are graded according to their dust and moisture resistance characteristics. The foreign objects referred to here include tools, human fingers, etc., which are not accessible to the live parts of the lamps to avoid electric shock. The IP protection level consists of two numbers. The first number indicates the level of the lamp from dust and foreign objects. The second number indicates the degree of airtightness of the lamp against moisture and water intrusion. The larger the number, the higher the degree of protection. The higher the level of protection represented by the two marked numbers is shown in Tables 1 and 2.

Table 1: The degree of protection indicated by the first indicator property number (number)

Detailed in the table: the first one defines the digital protection level definition

Table 2: The degree of protection indicated by the second indicator property number (number) 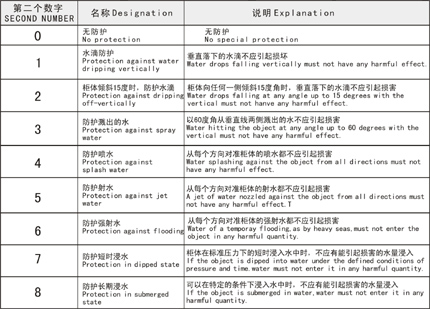 0 no protection, no protection
1 Prevent dripping water from intruding into vertical drops (such as condensate) without harmful effects on the lamp.
2 It can prevent dripping water when tilted at 15 degrees. When the lamp is tilted from vertical to 15 degrees, dripping will not cause harmful effects on the lamp.
3 Prevent the sprayed water from intruding into the rain, or prevent the water sprayed in the direction perpendicular to the angle of less than 60 degrees from entering the lamp.
4 Prevent splashing water from intruding to prevent water splashed in all directions from entering the luminaire and causing damage.
5 Prevent the intrusion of injected water to prevent damage from the water from the nozzles entering the lamp from all directions.
6 Prevent large waves from invading the luminaires installed on the deck to prevent damage caused by large waves.
7 Preventing the intrusion of water during flooding The lamp is immersed in water for a certain period of time or the water pressure is below a certain standard to ensure that it is not damaged by water ingress.
8 Preventing the intrusion of water when it sinks The indefinite sinking of the lamp under the specified water pressure ensures that it will not be damaged by water ingress.

The product is manufactured in accordance with GB4004-83, JB/T7600.3-94 and DlN46395 standards. Its common carbon steel Q235 thin steel plate punched into corrugated type serves as the lateral plate; And its mandrel and major body are supported by four-groove reinforcing steel bars. The product has the characteristics of not only strengthening the strength of bobbin, but also having light weight of bobbin, which can be used for buncher, stranding machine, extruder, cabling machine and armouring machine.