Mercury sphygmomanometers have some inherent shortcomings: First, the speed of deflation has a direct impact on the reading, the international standard deflation rate is 3 ~ 5mmHg per second, and the speed of deflation by different doctors will affect the measurement accuracy The second is that this method is based on human vision, hearing and coordination, which is difficult to standardize. To this end, this design starts with the blood pressure detection method, using the high-speed, low-power MN101EF32D single-chip microcomputer of Panasonic Corporation of Japan as the core of blood pressure measurement, control, data reading and writing, data display, and can accurately adopt the oscillometric method (oscillation Method) Measure blood pressure.

The basic working principle of the system is shown in Figure 1. The voltage signal output by the pressure sensor is first filtered by a low-pass filter, then the signal is converted into an input signal suitable for the single-chip microcomputer by the op amp circuit, and finally the analog sampling signal is converted into a digital quantity through the MN101EF32D single-chip microcomputer. The program performs digital filtering on the collected data and analyzes it to calculate the two key indicators of human blood pressure, "diastolic blood pressure" and "systolic blood pressure", and then the microcontroller immediately stores the data in external memory and displays these important data on the LCD . 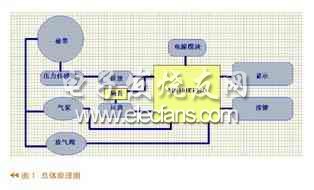 Introduction of sensors and design of peripheral circuits

The sensor used by the sphygmomanometer is MPS-3100-006G piezoresistive pressure sensor, which is a Hui type bridge composed of four equivalent resistors. Its output voltage is proportional to the input pressure. Under ideal conditions, when the pressure is input, the resistance The value changes accordingly, but in fact the change of temperature will also affect the output value of its resistance. In addition, due to errors in crystal and circuit design and manufacturing, plus the impact of the packaging process, the zero offset is not zero. Therefore, individual components must be used to correct individual temperature compensation circuits. Its important indicators are as follows:

f. The temperature coefficient of resistance is: 0.2% / â„ƒ

Because the blood pressure signal is taken from the arm, the measured signal is easily interfered by the position of the cuff and the movement of the arm. According to these professional characteristics, the system is required to have high input impedance, high gain, high common mode rejection ratio, low noise and low drift. As shown in Figure 2, T1 in the figure is the MPS-3100-006G piezoresistive pressure sensor. The entire circuit first converts the pressure signal into a voltage signal, and then performs amplification and filtering. U1, U2 in the picture are active op amp LM324, its input impedance is very high. After the signal of the pressure sensor is amplified, the closed-loop gain of the op amp is changed by adjusting the size of VR1 to adjust to the voltage input range suitable for A / D. The U1 op amp circuit is used to measure the pressure in the cuff. The measured data is used by the MCU to analyze and control the speed of inflation and deflation of the cuff. In addition, the U2 op amp circuit amplifies the AC signal separated by the C11 capacitor. This circuit measures the pulse wave of the human body. The collected data of the two circuits constitute the important calculation parameters of each index of the sphygmomanometer. 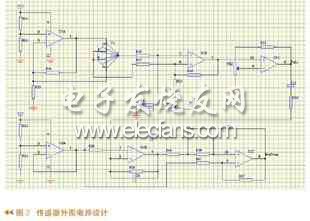 To increase battery voltage and capacity of a power system, cells have to be connected in series or in parallels. Due to unequal self-discharge and physical variations of the cells as different as it was made in factory, the State-Of-Charge(SOC) of the cells will differ sooner or later in the following no matter whether it been used or not. Therefore, the discharge process has to be stopped when one cell has reached its minimum voltage and the energy in the other cells is waste. The utilizable energy of a series circuit is limited by the weakest cell in the pack. To completely discharge all cells, weaker cells must be recharged. This process is called cell balancing or cell equalizing, which is much more energy-efficient than any other methods. And it is very important for prolonging battery lifespan due to reducing internal resistance and slowly sulfided.
Our Battery Equalizer is designed specially for Electric Vehicle Power, which it packed in series by 12V cells. The equalizer with smaller smart pulse is installed onto battery bank in everyday's driving. Keeping all the batteries in your electric vehicles equalized allows them to be completely charged and to give off a completely discharged. And make to give you a longer travelling distance and better experience. By adding our smart pulse equalizer to your vehicle power battery bank, the cell batteries are desulfated and equalized on a consistent basis so they will always be in as new ones. When there is no internal resistance in the cell batteries, there is less wear and tear when vehicles starting and being speed up. The total electrical power system benefits as the batteries are equal as in like new conditions.
Smart pulse Equalizing system for 48, 60, 72-Volt battery banks, patented pulse technology reduces and prevents sulfation buildup. Maximizes the performance of all lead-acid battery including VRLA, AGM, GEL and Flooded cell batteries.

Previous: China Mobile: 5 years will transition from 3G to 4G

Next: Architecture design of the new generation audio DAC